by nichols
Any idea where this great little Johnny's Coffee Shop was located? THANKS
by Synthetrix
That is a very cool coffee shop. It reminds me a bit of some of the old Biff's restaurants.
I have been watching a lot of old Adam-12 episodes lately and they have some great views of late 60s/early 70s Los Angeles County. They show Biff's in a few episodes.
by nichols
It reminded me of Biff's too. Alan Hess thought it might be a Russell Forester design (he did the earliest Jack in the Box prototype) so I sent it to a bunch of experts in San Diego and no luck. The photo is by Julius Shulman but he can't remember what the project was. ANYBODY KNOW?? How about Allen? Is he around? Allen....
by 2Tone
That is really neat looking. Does anyone have more pictures?

by retrocool
My dad told me there was a Johnnie's in Huntington Park. The same owner as Johnie's in Downey. He sold the H.P. location and moved it to Downey. Maybe this is it.
by PaulKaplan
I remember going to a Johnnies in Hawthorne or Torrance I think too many years ago- but this doesn't look familiar.
by sort77
by nichols
THANKS TO ALL
for the leads. However, just to recap.
It's not Johnie's in Downey

and it's not Johnie's at Wilshire and Fairfax

A very similar angle of this same photo in black and white appears unidentified in Sam Hall Kaplan's "L.A. Lost and Found" 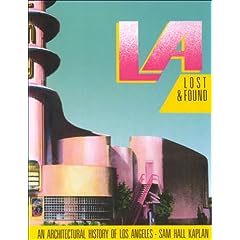 by retrocool
by babyblue65bird
by nichols
Wow! intriguing. It really does share some similarities with that place, doesn't it? by babyblue65bird
Comparing the two, Johnny's is a lot narrower than Rosie's, so it is possible that the flat roof section on the right is an addition. Still, the building next door to the left of Rosies is of about same vintage (and has a pretty nice folded arrow sign itself) and is different from the one in the picture of Johnny's. Now, there's another very similar building out in that end of the valley that currently houses a burger/taco place, and I can't remember if it's on DeSoto, Canoga, or Mason.
by nichols
It's really close, but I don't think we have a match. This building was built in '64 (SUPER late for this sort of thing) and it became Roy's in '68, so if it was a match it only lasted for four years. Would they have torn out flagstone and done this patterned block along the base? Probably not. the glazing is all wrong, but could have been replaced The connection between the roof and the supports is really crude It DID have the remains of this very nice terrazzo floor, though by KevinEP
by nichols
by jmarellano
I discovered another coffee shop exactly like this today driving home from work (and thus causing me to register).

It has the same roof angle, the same number of panels in the front. Unfortunately, this may not the same as the one in the picture. It doesnt have the rockwork, and the building in the back is not the same (its on a higher ridge).

There was an addition made to the backside, so the front windows and side windows do remain the same.

by Futura Girl
by deanna b
While I'm reasonably certain it's not our mystery location, the angled front reminds me of the building at Victory and N Clybourn in Burbank () that's now the Blue Ribbon Coin-op Laundry, and an identical building somewhere on Whittier (I think...) that's an Asian cafe of some sort.
by nichols
Does anybody here have "L.A. Lost and Found" by Sam Hall Kaplan? Could you post the black and white daytime version of this image? Maybe it offers more clues. I can't find my copy. THANKS
by nichols
I think the coin laundry in North Hollywood was a chain.. Feel like I've seen that inverted triangle signage before... doesn't feel right Yeah! Here in Duarte. I also don't think it's this sushi place at 1723 Huntington Drive either...